The Ecobulk SX-D from Schutz appears to be the first and only, at time of writing, composite IBC tank to gain the “FM Approved” seal of certification by the FM Global Group.

The FM Approval seal is based on the internationally recognised FM6020 test standard and applies to flammable, highly flammable and combustable liquids and products which have a flash point of less thatn 37.8 degrees celsuis. Gaining this approval means that container is subject to some rigerous fire testing by FM Global and Schutz are very pleased to announce that the SX-D passed with flying colours. 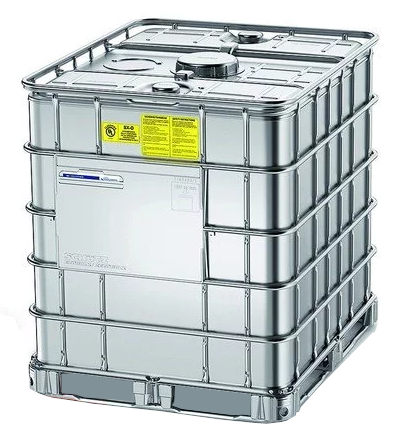 So what is it that made the SX-D gain this approval, allowing it to be used in Zones 1 & 2?

Firstly, just like the SX-EX IBC, the SX-D has a flameproof jacket wrapped around it between the metal cage and the bottle itself, however where it differs from an SX-EX is the openings. The top manhole entryway has a locking metal flameproof lid, as well as a smaller G2 or S56 x 4 opening for a dip tube – again with a flameproof lid.

On top of this, the SX-D has no valve opening area – usually considered the weak-point on all IBCs when it comes to fire and also drop-tests. Getting rid of this weakpoint means that the SX-D ia very robust no matter what is thrown at it, not to mention is removes the possibility of flammable and hazardout liquids to leak or be spilled upon emptying the IBC tank which not only increases fire risks, but also adds to potentially lengthy cleanup operations.

The SX-D is currently a rare-sight in the United Kingdon, however Pensteel are trying to source these containers as samples for our customers.